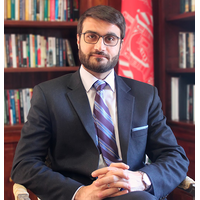 The Mission Statement of NPCA’s new affiliate, The Peace Corps Alliance for Intercultural Understanding, states that in pursuit of an improved understanding of America’s component cultures we will “promote an information and educational exchange among our fellow…citizens,” which will Educate, Advocate and Organize in resistance to “bigotry, racism, antisemitism, Islamophobia and prejudicial discrimination in all of its forms.” In fact, we believe it was precisely to affirm these idealistic principles of intercultural understanding that the Peace Corps of the United States of America was established. Peace Corps has proven for more than fifty five years that, “Nothing defies fear like a friendly face.”

Dr. Hamdullah Mohib, Afghanistan’s British educated Ambassador to the United States of America, may not be fully aware of how central his expression of concern about the rising tide of Islamophobia in America has been to the founding of our “Intercultural Alliance.” Dr. Mohib’s credentials as an activist and organizer are well known and respected within the Afghan community. While living in the UK, the future ambassador, was an advocate who organized civil society initiatives among the global Afghan community and founded the largest Afghan diaspora youth association in Europe. He also worked on the 2009 and 2014 campaigns of Afghan President Ashraf Ghani prior to his appointment as Ambassador to the United States.

Early last summer, coincidental with the height of the contentious political season, Dr. Mohib accepted my request to meet with him at the Embassy of Afghanistan in Washington. After our exchange of traditional Afghan greetings and the customary cultural pleasantries we began what would prove to be a very significant meeting where the first seeds of the The Peace Corps Alliance for Intercultural Understanding were planted. Regarding my then immediate concerns about the large RPCV reception being planned, Dr. Mohib assured me that all was going well.  The Ambassador and his staff were planning to hold the celebration concurrent with the NPCA Peace Corps Connect Conference. The Embassy fete was organized to honor the notable contributions of the Peace Corps Volunteers who served in Afghanistan from 1962 to 1979 and to reintroduce the Ambassador and his staff to our historic program. Our seventeen-year service started in the Kennedy years and ended soon after the assassination of US Ambassador Dubbs; just prior to the Soviet invasion. Ultimately, more than one hundred RPCVs, who were in our nation’s capital attending last year’s 55th Anniversary of the Peace Corps along with other guests of the Embassy, were able to participate in the impressive Embassy gathering.

After our organizational discussions about the gala had ended, the Ambassador pivoted to more existential topics. He began to inquire about the role of our NPCA affiliated organization Friends of Afghanistan and asked what we were doing to promote awareness of the unique challenges facing our host nation. The Ambassador was pleased to hear that FoA had recently been recognized as the winner of the Loret Miller Ruppe Award, which recognizes outstanding service by a Peace Corps group to their country of service. Then Dr. Mohib asked what we RPCVs were planning to do to oppose the rising tide of Islamophobia that was then being divisively exploited during the political campaigns.

One month later an answer began to emerge. During NPCA’s 2016 AGNAM groups meeting, Millard Mott, the President of the Friends of Pakistan stood up and implored the leaders of the affiliated Peace Corps groups to join together to directly address this concern. Within weeks after that NPCA Conference in DC, leaders from RPCV groups representing majority Muslim nations and regions began discussing our organizational structure and what would be the nature of our response. One of our conclusions was that while we would remain unequivocally true to our Peace Corps experiences as respected and welcome guests in Muslim cultures, we would address Islamophobia not as an isolated niche but more broadly as a symptom of xenophobia and lack of intercultural awareness. Consequently we remain firmly committed to promoting dialogue that reveals the incompatibility of bigotry, racism, antisemitism, Islamophobia and all forms of discrimination with traditional American values.

Our RPCVs seek to establish a broad unified intersectionality among NPCA affiliated groups. The Peace Corps Alliance for Intercultural Understanding invites all concerned RPCV groups and individuals to learn more about us and join us in a renewed effort through Peace Corps’ Office of the Third Goal to Educate, Advocate and Organize in partnership with NPCA’s Country of Service groups, Geographic and Regional groups as well as Cause related groups in a tangible expression of our shared values through support for NPCA’s refugee advocacy group, The Peace Corps Community for the Support of Refugees.

As these influential RPCV units begin to work with school and community groups in a promising alliance with Rotary international, a pathway of intercultural understanding will begin to appear with the potential to lead us from our current state of division and contention to a place where we will reaffirm that all Americans are members of “one nation, under god, indivisible” and that we will offer “liberty and justice for all.”